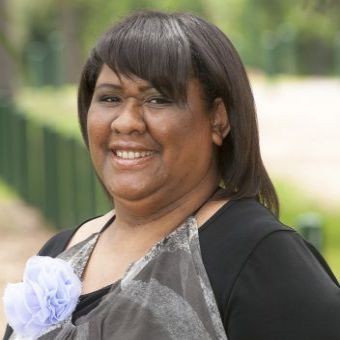 Terori Hareko-Avaivilla believes her family, culture and community are three very important aspects of her decision to work within a community development, social justice and health frameworks. She comes from a strong Torres Strait, Papuan heritage and has always lived in Melbourne but she was exposed to community work in her early years in many locations such as Arnhem Land and Elco Island in the NT, Tanna Island and Port Vila in Vanuatu, Port Moresby in Papua New Guinea and other south pacific regions where her parents worked as community development workers under AusAid.

Terori’s  personal and professional development are very much shaped by all the collective teachings from her early years, most of these lessons are only just making sense to her now as her understanding and knowledge of the global village is more established.

She began her career in community development as a trainee at the Brotherhood of St Laurence (BSL) in Fitzroy, during this time she was provided with opportunities for further training which lead her to complete Train the Trainer and Diploma of Community Education at RMIT. BSL nominated her for the Victorian Training award in 2005, where she won the Trainee of the Year going to the nationals to represent Victoria, where she was a finalist.

At the end of 2005 Terori was requested to apply for the role of Aboriginal and Torres Strait Islander Women’s Support Worker at the Royal Women’s Hospital and was subsequently appointed in the ATSIHLO role at the women’s for nine and half years before her appointment as Team Leader of the Aboriginal and Torres Strait Islander Health Program at cohealth.

Terori was the Senior Project Manager First Nations Values of Water for Yarra Valley Water, South East Water and City West Water.  She also runs a consultancy offering organisations and individuals the opportunity to yarn and learn through the ‘8 Ways of Knowing Knowledge Wheel’.  This training moves away from traditional cultural awareness and offers participants a unique opportunity to either build their cultural understanding through cultural knowledge sharing, storytelling, cultural activities and opportunities.

Terori has recently dedicated herself to her consultancy which is a First Nation business providing cultural consultancy, cultural education, creative workshops and yarning circles.