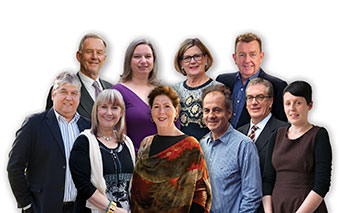 Peter Maher is the Managing Director of Strange Fellows Investments and the founder and Managing Director of Rehame, a media monitoring and analysis company, which he sold out of seven years ago. He has an extensive background in media and also provides on air broadcasting services to radio station 3AW in Melbourne.

Born and raised in Deniliquin, Peter has a keen interest in horse racing and breeding, and football. He is also the Chairman of the Committee of Management of the DOXA Social Club. After working for many years in the Northern Territory and Western Australia, his Honour Judge David Parsons returned to Melbourne to resume his practice at the Victorian Bar until his retirement in 2017. He has spent a substantial amount of time in the Northern Territory representing various First Nations groups before being appointed as Senior Counsel in 2001 and a Judge of the County Court of Victoria in 2006. He is a member of the Law Council of Australia’s Indigenous Affairs Committee, a Director of the Koorie Heritage Trust and a member of the Indigenous Lawyers Committee of the Victorian Bar Council. Genevieve Timmons has over 30 years of experience in grant making and social investment, and is the author of “Savvy Giving:  The art and science of philanthropy,” which was commissioned by the Australian Communities Foundation.  Her current professional appointments are as the Senior Associate Partnerships Manager, Alliances with the Paul Ramsay Foundation and the Naomi Milgrom Foundation on on the board of TOM Melbourne and Studio Schools Australia.  Recent past board appointments include the Philanthropy Australia Council, founding director and strategic adviser for the Mornington Peninsula Foundation, founding director and Chair of the Inner North Community Foundation, board member with Australian Community Philanthropy, and Ambassador of the Victorian Foundation for Survivors of Torture. She has an Honorary Doctorate from Swinburne University for her contribution to philanthropy and social change in Australia. Kellie Horton until late 2021 was at VicHealth as the Executive Lead Policy and Research.  Her role involved working to reduce health inequalities across the spectrum of health promotion areas, including Indigenous health. Her experience includes program and policy development in the community sector, local and state government, and non-government organisations.

Kellie is currently consulting with organisations to build and apply evidence for policy and systems change in order to create healthier and more equitable communities. Kylie Price specialises in communication and data analysis and works with small business and company departments to ensure maximum efficiency and use of best practice. She also provides assistance with strategic planning and development, organisational management, operational efficiency and cost management including developing systems, templates and best suppliers.

With a background in science and experience across a range of sectors including marketing, media and most recently philanthropy, Kylie helps to recognise challenges and streamline work practices. Jonathan Moodie worked as a metallurgical engineer for Rio Tinto for 30 years in a range of operating and technical roles in Australia and overseas. He is now a linguistic expert and in 2020 published “A Grammar of Lopit: An Eastern Nilotic Language of South Sudan” (Co-Author Rosey Billington).

He was previously the Chair of the not-for-profit IT company, InfoXchange. Jody Barney is a proud Deaf Aboriginal/South Sea Islander woman who has lived in Victoria for 30+ years and has developed strong connections with mob in Wodonga to Mildura, Bairnsdale to Eden, Geelong to Warrnambool, her home town of Shepparton, and all regional centres.  She has worked as an expert communications consultant locally, state and nationally.

Jody is on the Board of the Koondee Woonga-gat Toor-rong an Aboriginal and Torres Strait Islander Led Philanthropic Fund and was inducted into the 2021 Victorian Honour Roll of Women. Marian Pettit  until late 2021 managed a network of over 60 local community organisations across Australia to deliver the Brotherhood of St Laurence’s flagship early learning and parenting – Home Interaction Program for Parents and Youngsters (HIPPY) in 100 communities. She has over 30 years’ experience working in social policy and delivering services in government.

Marian has also worked with Cape York First Nations communities and has lived for a time in the Lockhart River.  She has a degree in applied science and a diploma in public management. Janine Coombs is a Wotjoboluk woman who has worked in the Traditional Owner, Native Title, and Treaty space for the over 8 years. Currently Deputy Chair of Barengi Gadjin Land Council Aboriginal Corporation and is the Manager – Recognition, Advocacy and Media at Barengi Gadjin. She is one of the first members of the Victorian Treaty Working Group and one of the 250 Aboriginal people who took part in the Uluru delegation and came together to create the Uluru Statement from the Heart. Member of the Uluru Statement Executive Committee, Collingwood Reconciliation Action Plan Advisory Committee, Cricket Victoria Reconciliation Action Plan Advisory Committee and Melbourne University Reconciliation Action Plan Traditional Owner and Elders Reference Group.

Elly Krommidas is Head of Business Enablement at the Brotherhood of St Laurence (BSL).  During her career, Elly has held various executive and leadership positions giving her an extensive background in stakeholder engagement, risk and quality management, innovation and technology-driven performance improvement.

Elly is a member of BSL’s Reconciliation Action Plan Committee and has a strong sense of social justice with significant involvement in reconciliation with Indigenous Australia, children with terminal conditions and active mentoring of disadvantaged youth and workers.

We appreciate and value the contribution of past members of the Advisory Committee. They include: