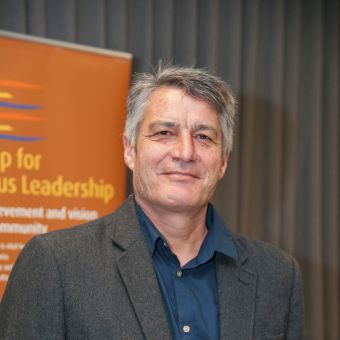 Peter Aldenhoven is a proud descendant of the peoples of Quandamooka – more particularly, the Nughi clan from Moorgumpin (Moreton Island, Queensland) and has lived in Victoria for all his life.

Peter was a Foundation Member of the Willum Warrain Aboriginal Association and is currently the Chief Executive Officer.  Willlum Warrain, which means “home by the sea” in the local language, is a space on the Mornington Peninsula where people can come together and connect.

Peter has dedicated thousands of hours to Willum Warrain and its ongoing development as a thriving gathering place. He has been a strong advocate since its inception and has represented the local Aboriginal community on many panels and committees, cultivated numerous partnerships and relationships with other agencies (NGO’s, government and philanthropic), and actively engaged with the broader community.

His vision for the Indigenous community in Victoria is for Victorian Koories, and Aboriginal and Torres Strait Islanders living off country, to be proud of who they are as Indigenous peoples both on an individual and collective basis, through close (re)connectedness with their cultures and communities.

Until May 2018 he taught English and was the Director of Indigenous Education for 20 years at Woodleigh School in Langwarrin.  He has also been a teacher at five other Victorian schools and held many positions of responsibility such as Head of English and was a Victorian International Teaching Fellow in 1987. He has also run exchange programs with remote Aboriginal communities (Ampilatwatja and Miwatj).