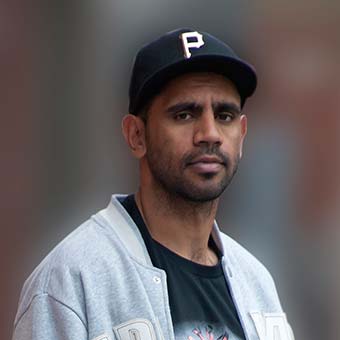 Nathan Lovett-Murray has demonstrated a high level of commitment to improving the lives of people within Victoria’s Indigenous communities. He has achieved a great deal over 12 years in both the Indigenous and wider communities.

Nathan was born in Heywood on his mother’s country – Gournditchmara. Through his father, he is also a multi-clanned descendant of the Wamba Wamba, Dhudhuroa, Baraparapa, Dja Dja Wurrung, Yupagalk, Wergaia and Yorta Yorta clans in Victoria and Wiradjeri in New South Wales.

He has extended and extensive clans, namely the Lovett, Rose, Winter, Murray, Nicholls, Stewart and Atkinson clans. Nathan has strong cultural and contemporary links with south west, north-west and north-east regional Victoria, as well as a strong identity with the Greater City of Melbourne.

He is an elite professional AFL sportsman with strong business links to the community-based Indigenous Sports Management, Payback Records and Bunjil’s Business. Nathan has been greatly influenced by his great grandfather, Pastor Sir Douglas Nicholls JP; MBE; OAM; KCVO, Bapa Mamus (1906-1988) and his grandfather, Stewart Murray JP; OAM (1922-1989), and his parents who have been actively involved in the cultural and political movements at state and national levels over a number of generations.

Today, football, music and protecting the human rights of Indigenous people are the driving forces in his life, and are the building blocks to his continued leadership and professional development in sport, music, culture, human rights and politics.