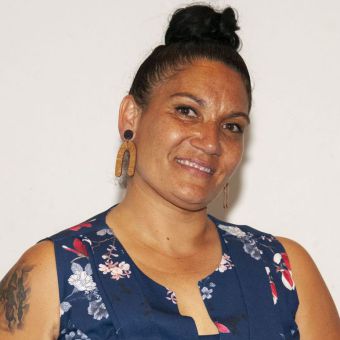 Naomi Murphy is a very proud Wakka Wakka women with bloodlines to Cherbourg Community, Woorabinda mission in Queensland, was respectfully on Gunnai/Kurnai country in Gippsland for over 20 years until recently when she returned to Queensland.

Naomi is the Aboriginal Ex-Offender Employment Project Worker for Woor-Dungin’s Criminal Record Discrimination Project and was a presenter at the statewide Aboriginal Justice Forum held in December 2018, which resulted in the unanimous endorsement of their submission for reform.

She was previously employed as the Central Gippsland Client Services Support Worker at the Victorian Aboriginal Legal Service.

With nearly 15 years working in community Naomi has many achievements such as:

In 2019, Naomi presented testimony of her own lived experience around Criminal Record Discrimination at the Victorian State Parliament enquiry into Spent Conviction legislation, and arranged a series of community meetings. Her advocacy proved catalytic in persuading the enquiry to recommend a Spent Convictions scheme for Victoria.

Naomi developed a pilot program for Aboriginal and Torres Strait Islander women/young girls to help keep families together in a safe environment and out of prison.