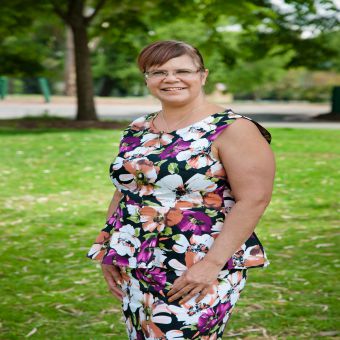 Rebecca Crawford is a Barkindji woman from North Western NSW who comes from a large family in the northwest region of the Darling River. She previously worked in NSW in Aboriginal identified positions in the areas of land rights, education and child protection from 1991 to 2008.

Rebecca moved to Victoria for over 7 years during which time she was a Senior Caseworker with the Victorian Aboriginal Child Care Agency (VACCA), co-ordinator of the Wadja Aboriginal Family Place at the Royal Children’s Hospital in Melbourne, and an Aboriginal Community Development Worker with Dental Health Services Victoria (DHSV).

During her time in Victoria she really felt herself grow as a leader, as she managed four Aboriginal clinical workers in the hospital environment, tested the model of care that was developed for the service, and participated in a lengthy evaluation of the model of care with Onemda from the University of Melbourne.

Rebecca has become a strong advocate for Aboriginal children in the child protection and health system. She feels that it is important to support and guide Aboriginal families toward better outcomes and believes that building cultural awareness in non-Aboriginal people is a key factor towards ensuring that cultural safety is clearly demonstrated to Aboriginal people and they are empowered as much as possible.